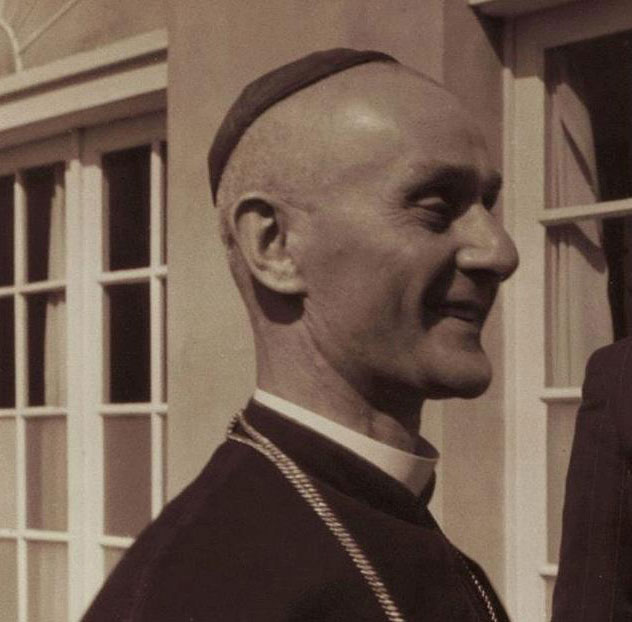 You have given us the venerable Bishop Boleslas Sloskans
as a humble witness to the love of your Son who gave himself up for us.

True to his episcopal motto Hostia pro fratribus – « Offering for his brothers« ,
Bishop Sloskans bore witness to the love of the Good Shepherd
in the extreme conditions of his captivity,
but also by consuming himself in ordinary life.

Through his intercession, grant us the grace we implore,
animated by the strong desire that he be beatified soon.

Our Father… Hail Mary… Glory to the Father…

Opening of the Cause of Beatification

Bishop Boleslas Sloskans’ reputation for holiness accompanied him throughout his life. Although he did not die a martyr’s death, he was ready to die for the Church, as he himself said. His whole life, which ended in 1981 in Leuven, where he spent his last 33 years, was an « offering for his brothers », a hostia pro fratribus, according to his episcopal motto: he truly loved to the end. It is therefore understandable that the Archdiocese of Malines-Brussels, where Louvain is located, opened his beatification process on 15 April 1999, which has already led to the recognition of the heroicity of his virtues, proclaimed by John Paul II in 2004. This is the result of the work of a whole team led by Mgr Stefaan Van Calster.

On 10 May 1996, the « Mgr Boleslas Sloskans » Foundation had already sent a request to Cardinal Godfried Danneels, Archbishop of Mechelen-Brussels, to recognise this Foundation as an actor (« applicant ») in the Cause of Beatification of Mgr B. Sloskans and proposed that the Foundation be recognised as an « actor ». Sloskans and proposed Father Stefaan Van Calster as Postulator of the Cause. As the mortal remains of Mgr B. Sloskans had been transferred to Aglona in Latvia on 10 October 1993, Cardinal Danneels thought that the Latvian episcopate should open the Cause itself. But Cardinal Janis Pujats, Archbishop of Riga (Latvia), did not see the necessity and possibility of opening the Trial in Latvia. Bishop Antons Justs of Jelgava (Latvia) personally explained to Cardinal Danneels the point of view of the Latvian Bishops’ Conference, which unanimously and strongly wished to see the process of beatification of Mgr B. Sloskans, without being able to take the initiative in Latvia itself, due to a lack of resources. In a letter dated 23 April 1999, Cardinal G. Danneels sent a favourable reply to the « Mgr Boleslas Sloskans » Foundation, establishing it as an actor (« applicant »). On 16 June and 15 September 1999 respectively, Father A.-M. Jerumanis, professor at the Faculty of Theology in Lugano (Switzerland), and Mgr J. Lescrauwaet, former auxiliary bishop of Haarlem (Netherlands), gave their ‘nihil obstat’ on the writings of Mgr Sloskans.

Installation of the diocesan tribunal

On 10 March 2000, Cardinal G. Danneels set up the tribunal for the beatification. Father Stefaan Van Calster was appointed episcopal delegate for this Cause and Dr Janis Jerumanis became postulator. Dr. Jerumanis had already collected 35 testimonies, some of which he published in his book on Bishop Sloskans in Latvian (1990).

On 12 March 2000, Cardinal G. Danneels sent an official letter to the Prefect of the Congregation for the Causes of Saints, explaining the reasons for the request for beatification. In the meantime, Cardinal Casimir Swiatek, Archbishop of Minsk (Belarus), of which Mgr B. Sloskans had been Apostolic Administrator from 1926 to 1981, had been informed of the opening of the Cause.

An important part of the court’s work was the questioning of witnesses who had known Bishop B. Sloskans personally. Sloskans personally. The aim was to find out how he lived his fidelity to the Gospel. 36 sessions were organised in Belgium, Germany and the Netherlands. Thirty people were interviewed. The tribunal also travelled to Latvia to interview 14 witnesses in 14 sessions.

Consultation of the archives

On the basis of these witnesses and the work on the biography of Archbishop Sloskans carried out by Father A.-M. Jerumanis, the tribunal requested access to 21 archives, including the archives of the Second Vatican Council, the archdioceses of Malines-Brussels, Minsk and Riga, the Generalate of the Society of Jesus in Rome, the Carmelite monastery in Lisieux, Moscow, St. Petersburg and the KGB in Minsk.

The orthodoxy of the writings

A.-M. Jerumanis gave a summary of the writings of Bishop Sloskans, making the official statement that there was nothing against faith and morals or against the Church. Father P.-M. Jerumanis also had to give his opinion on the matter.

The study of the heroicity of the virtues

Father P.-M. Jerumanis, who at the time was a professor at the Studium of Our Lady of Life and a member of the Faculty of the Teresianum in Rome, was given the special task of presenting the spiritual life of the Servant of God and, above all, of carefully studying the holiness of his life. He therefore had to verify, on the basis of all the documents and testimonies, whether Archbishop Sloskans practised the theological virtues, the cardinal virtues, the evangelical counsels and, finally, humility, which is the virtue that authenticates the whole organism of virtues.

The fame of sanctity

The tribunal also studied the reputation of sanctity of Mgr B. Sloskans. Already in the St. Petersburg seminary, Boleslas Sloskans was considered a saint. As a young priest, the holiness of his life was noticed by his confreres. It was precisely because of his holiness that Bishop Pius-Eugene Neveu presented Abbot Boleslas Sloskans to Bishop Michel d’Herbigny as a candidate for the episcopate. After his release in 1933, his holiness became even more evident. He left an unforgettable impression in Latvia, where he ministered from 1934 to 1944. Because of his reputation for holiness in Latvia, the Archbishop of Riga requested the transfer of his mortal remains to the Latvian Marian shrine in Aglona in 1993. The testimonies of people who knew the Servant of God in Belgium and Germany after the war only confirm his reputation for holiness. Many bishops, priests, nuns and lay people testify to his configuration to Christ. In Belgium, he was simply called « the holy bishop ». The three abbots of the Benedictine Abbey of Mount Caesar, who succeeded each other during the almost 30 years that Bishop Sloskans lived in the abbey, also attest to the exemplary and holy nature of his life.

The Roman process: recognition of the heroicity of the virtues

The acts of the informative process of the tribunal set up in the Archdiocese of Malines-Brussels were deposited with the Congregation for the Causes of Saints. On 11 January 2002, Father Ambrogio Eszer, OP, was appointed Relator General. Together with his collaborators, Bishop S. Van Calster, who was appointed Roman postulator, compiled the acts in a Positio which was presented by the relator general to the nine consultative theologians of the Congregation on 20 February 2003. In conclusion, the Relator General wrote: « Having studied all the Acts of this Cause and all the historical sources, we are convinced that there is no need for further research: the material presented in the Positio is more than sufficient for the reverend theological Consultors to examine in order to make their Votum on the heroic virtues and the reputation for holiness of the Servant of God Boleslas Sloskans.

The work of the nine Consultors was presented on 8 November before a special congress of the Congregation for the Causes of Saints. At the end of the discussions, the Consultors voted unanimously in favour. The Promoter General of the Faith, Archbishop Sandro Corradini, then proposed to Pope John Paul II that the heroic virtues of the Servant of God be recognised. The decree on the heroicity of the virtues was promulgated on 20 December 2004. From then on, Bishop Boleslas Sloskans was called « Venerable ».

For the beatification of Mgr B. Sloskans, the Pope has yet to recognise a miracle attributed to the venerable bishop.

The healing of a Brussels priest attributed to the intercession of Bishop Sloskans was carefully examined by four Belgian doctors. According to their conclusions, this cure is, in the present state of science, inexplicable. The file has been submitted to the Congregation for the Causes of Saints, which has not yet recognised the healing as a miracle.

Other healings attributed to Bishop Sloskans that appear to be inexplicable are under investigation.

Discovering the figure and teaching of the venerable bishop

The whole process that we hope will lead to the beatification of Bishop Sloskans is not limited to the study of favours or cures attributed to the venerable bishop. For the good of the Church, the figure and the very current teaching of Bishop Sloskans deserve to be better known. The postulator of the Cause and the Bishop B. Sloskans Foundation also have the task of promoting the cause. Sloskans » Foundation also have the mission of popularising the venerable bishop, so that more and more people can get to know him and take him as a friend, brother or father, recommending themselves to his intercession. Bishop Boleslas Sloskans will be proclaimed blessed, and perhaps even a saint, when and if God wills it.